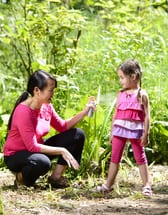 Lyme disease is caused by a bacterium spread to humans by the bite of an infected black-legged tick. The tick becomes infected with the bacteria if it has bitten an infected mouse or deer. Humans are most frequently bitten by young ticks (nymphs) that are small and difficult to spot. Individuals who go to places where black-legged ticks are prevalent should take care to protect themselves. Most cases of Lyme disease can be effectively treated if diagnosed early, but left untreated can result in serious, life-altering symptoms.

Black-legged ticks are most commonly found in the Northeast, the Pacific Coast and the upper Midwest. While they can attach to any part of the body, people are more likely to be infected if they are bitten in obscured areas, such as the armpits, scalp and groin, where the bites are less likely to be noticed. Since a tick must be attached to its host for 36 to 48 hours in order to transmit Lyme disease, it is best to discover and remove a tick before it becomes engorged with its hosts blood.

The first stage of Lyme disease usually occurs during the first few days to a week or two after a bite. During this stage, the patient may notice:

Only about 70 percent of patients develop the bullseye rash with Lyme disease and many people are unaware of either the bite or the rash. This is why the symptoms of Lyme disease often masquerade as the signs of other conditions.

The second stage of Lyme disease, which may occur weeks or months after the bite, may include:

While these symptoms may resolve without treatment in the weeks to months after they appear, left untreated the disease may result in even more serious, permanent, life-altering complications.

The third stage of Lyme disease, which may occur months or even years after the insect bite may include:

The neurological symptoms of third stage Lyme disease may include: numbness and tingling and cognitive deficits.

Diagnosis of Lyme disease, especially in its early stages, is difficult. Early blood tests may show a false negative. This is because the antibodies produced in response to the infection do not usually show up on blood tests until weeks later. The illness is usually diagnosed by a combination of symptoms and a medical history that indicates the probability of exposure to ticks. Even with a negative blood test result, antibiotics may be prescribed because of the importance of treating the disease as soon as possible.

Lyme disease in its earlier stages is usually treated with oral antibiotics that clear the infection and prevent future complications. Intravenous treatment may be required for patients with underlying medical conditions or for those with the more advanced stages of Lyme disease. Other medications may be used to treat specific symptoms of Lyme disease. Most symptoms of the disease will subside after thorough antibiotic treatment, assuming the disease has been detected early enough.

There are several measures that can be taken to avoid Lyme disease. These include:

Although Lyme disease is an uncomfortable and potentially serious disease, with proper precautions it can be avoided altogether or detected early enough to be successfully treated.