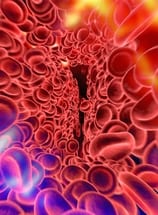 Behcet's syndrome, also referred to as Behcet's disease or Silk Road disease, is a rare condition involving inflammation in certain blood vessels throughout the body. It can result in a wide range of symptoms. This condition is more common in the Middle East and Asia than in other parts of the world. The long-term effects of Behcet's syndrome are not precisely known, although symptoms are believed to become less severe after about 20 years.

The specific cause of this condition is unknown, although the syndrome is believed to be caused by an autoimmune response in which the body attacks its own healthy cells. This may be the result of a combination of genetic and environmental factors. While a definitive cause of Behcet's syndrome has not yet been established, genetic links to Behcet's syndrome have been discovered. Doctors believe that a virus or bacterium may trigger the disease in patients with genetic susceptibility.

Symptoms of Behcet's syndrome may vary for individual patients, often affecting multiple areas of the body. In some cases the symptoms are relatively mild and may come and go as inflammation waxes and wanes. These may include:

Uveitis, or inflammatory eye disease, may also be a symptom of Behcet's Syndrome, and may lead to permanent vision loss.

There is no definitive test available to diagnose Behcet's syndrome, but certain criteria have been established to confirm an accurate diagnosis, including recurring ulcers on the mouth, genital organs, or skin, and inflammatory eye problems. Blood tests and other lab exams may also be performed to rule out the possibility of other conditions. An exam called a pathergy test which detects hyper-reactivity of the skin, may also be performed to determine whether or not the patient's immune system is functioning normally.

While there is no cure currently available for Behcet's syndrome, there are several treatment options to help relieve symptoms and reduce the frequency of flare-ups. Systemic treatments may include corticosteroids, immunosuppressants, or other medications to regulate the immune system and reduce inflammation. Treatment can also be invaluable as a preventative measure to reduce the risk of complications from this disease.